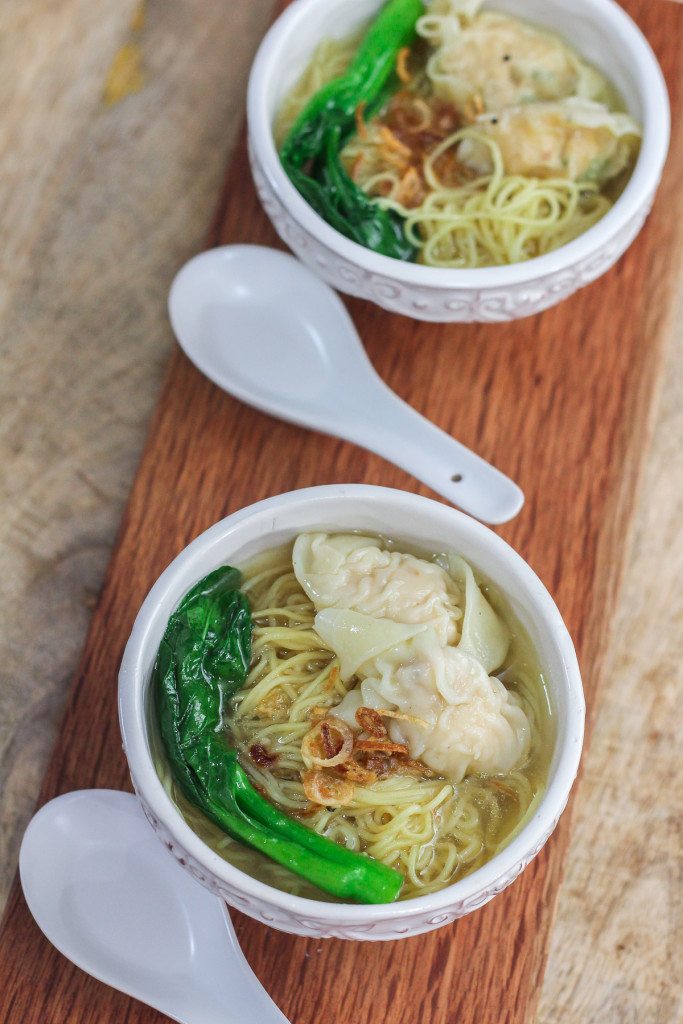 I share a love-hate relationship with YOUTUBE. On lonely nights, I snuggle up in bed with YouTube on my fingertips. On busy days, YOUTUBE keeps enticing me to watch something on it. I can’t even write a freaking blog post because every now and then I keep getting distracted. Sometimes it’s Ellen dancing away and sometimes it’s Nigella and her kitchen. I really need to get my priorities right.

With thanksgiving out of the way, it is time to plan for Christmas!! One of my favorite times of the year! It is just so pretty everywhere! Every year right after my annual Christmas party with the cousins, I end up thinking as to what I am going to prepare for our next year Christmas party. It feels like it was just 2 months ago, I was wrapping Christmas presents and it IS going to be Christmas again? I am not complaining even if Christmas were to come every time I blinked my eyes, provided that an extra wrinkle does not bulge on my face with every passing Christmas. Truthfully, it feels unreal, though I suppose that’s the case every year. I spend two months preparing for Christmas and it still comes as a surprise when it finally arrives. Does that make me nerd?

Being nerdy is fine if you cook cool stuffs, right? Like this one 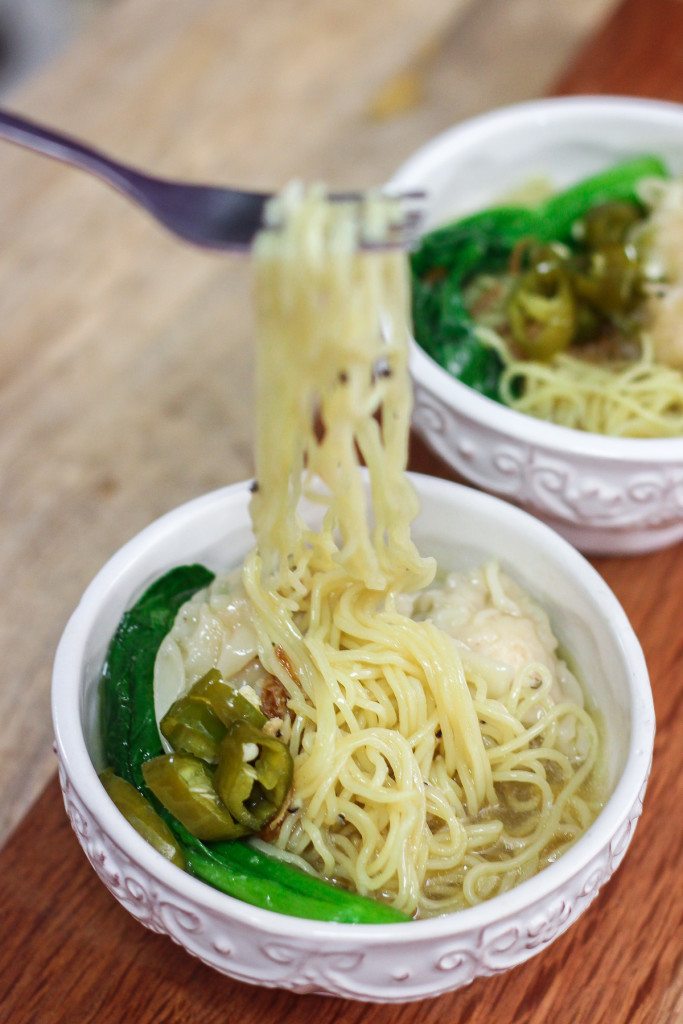 Wonton Noodle Soup, I love thee to the depth and breadth and height. ♥ I am tempted to employ a bunch of words to describe this Wonton Noodle Soup but I won’t despite the fact that this bowl of noodles is cozy, delicious, warm, enjoyable, satisfying and appetizing.

Wontons are basically dumplings that originate from the Chinese cuisine. It can either be steamed, fried or boiled. It can be eaten on its own or along with some noodles which is known as Wonton noodles. Although there are many variations of wonton noodles, the most popular one would be some egg noodles tossed in a sauce and topped with wonton. I have attempted something similar here. Another variation would be egg noodles served with a hot broth, garnished with leafy vegetables and wonton dumplings. This is the one we would be making today.

Although it is optional, but serving wonton noodles with pickled chilies just brings the noodles 1 notch up and it is SO easy to make the pickled chilies so I would suggest that you go for this.

Wontons are really simple to prepare. You would basically make the filling first, which in this instance I am using prawn and chicken meat. You can use all chicken, all prawn, fish or any other ingredients you prefer. Making dumplings out of wonton wrappers might seem daunting for some of you, but trust me, although there are many ways to fold a wonton, you can go with the easiest and most basic of wonton just like this one below.

It is that simple.

It is the holiday period and this is the perfect recipe to make with your kids. Gather them in your kitchen. If you have only two, nice family planning I have to say and if you have 7 of them, well you have got to make a WHOLE lot of wonton lady! Then again, you would be having 7 extra pairs of hands to help you. It is a simple project that they would love.

Do you know that Wonton wrappers can be used to make a whole lot of other stuff? You can fill a wonton wrapper with Nutella, apple pie filling, cream cheese and tons more. Simple desserts in a jiffy. You can also make tacos with wonton wrappers and oh lasagna too! Perhaps one of these days, I would do a post on wonton lasagna for you guys. It’s really quite scrumptious. 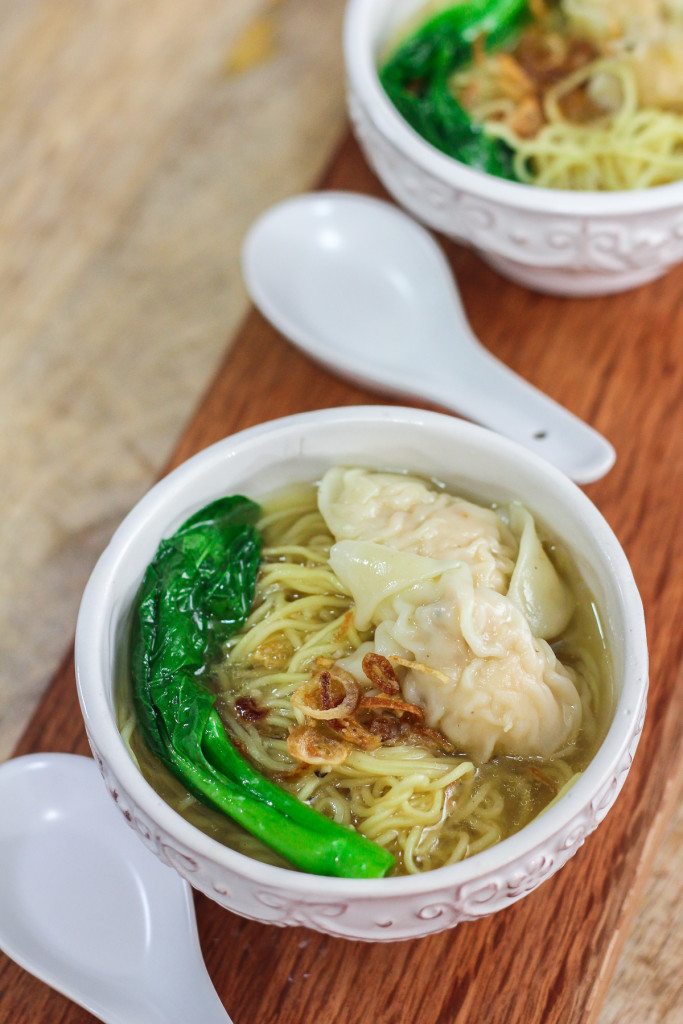 Wontons are a great make ahead. In fact, they freeze really well too! Firstly, you just have to lay the wonton in a single layer so that they do not stick to each other. Once they are frozen, you can just chuck them in a freezer bag. When you are ready to use them, just place them in the boiling broth. Do not defrost them prior to cooking as they would end up sticking to each other.

For me, this Wonton Noodle Soup is the perfect weekend treat. Slurping away to these noodles is what weekends should be made of!